Mystery of material science: a freshly made crystal of lithium niobate has an electric field of 15 MegaVolts/cm!

What are the limits  that  quantum physics  imposes on the electromagnet fields that spontaneously originate in crystals? 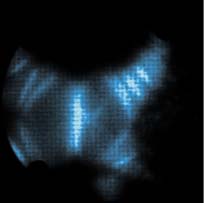 Scintillations produced by deuterium ions that strike a phosphor screen.  The ions are accelerated to high energy by a ferroelectric crystal.

Shown at the left is a phosphor screen that glows blue when struck by high energy ions.  The device used to produce high energy ions relies on a pyroelectric crystal of lithium tantalate, which produces a strong electric field when heated to room temperature from freezing.  This field is focused until it is powerful enough to accelerate a beam of deuterium ions (proton-neutron pairs) to about 1% of the speed of light.  The next generation of ferroelectric crystals will make mm sized, switchable neutron/x-ray  sources available.  Will such devices find medical uses?

A crystal that is only 10 cc in volume can be used to produce nuclear fusion on command.  Lithium tantalate is a pyroelectric crystal which produces more than 100,000 Volts when heated to warm room temperature from freezing!  This field is focused by a tungsten tip mounted on the crystal so that it dissociates, ionizes, and then accelerates a beam of deuterium ions (proton-neutron pairs) to about 1% of the speed of light.  When 2 deuterium nuclei collide at this speed, they can generate nuclear fusion and release a neutron with an energy that is about ten times greater than the kinetic energy of the colliding particles. 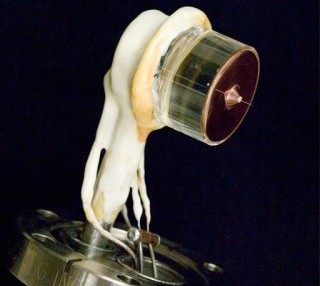 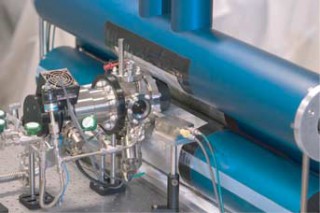 Apparatus to generate and detect nuclear fusion using a crystal.

When a lithium niobate crystal is heated by 10’s of degrees it accelerates electrons to energies in excess of 40 keV.  The fast electrons strike a zinc sulfide target which turns their kinetic energy into scintillations to make the patterns that you see in the movie.  Movie taken by William Wright,  and J.D. Brownridge was a big help to us.