Turbulence is the phenomenon whereby a fluid responds to the uniform input of a large amount of energy.  As fluid tries to convert all of this mechanical energy into heat, it sets up complex wave and vortex motions.  Although it may appear mostly random to the eye, the motion has many coherent structures and dissipation can be concentrated into localized regions, which is called intermittency.  The interplay between entropy production, randomization, and the formation of structures constitutes the unsolved problem of turbulence.  Researchers agree that the basic physics is contained in the Navier-Stokes equations, yet the solution of these nonlinear equations for turbulent motion remains an abiding issue.

Shown here is turbulent ripple motion on the surface of water.  At low amplitude of vertical vibration, the motion of the surface is almost regular and looks like a standing wave. 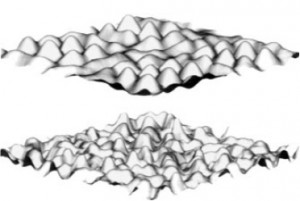 At high amplitude, the overall surface motion becomes more random and the energy is distributed over many length and time scales.  But as shown in the color image on right, dissipation is focused into smaller regions.

Imaging of Intermittency in Ripple-Wave Turbulence 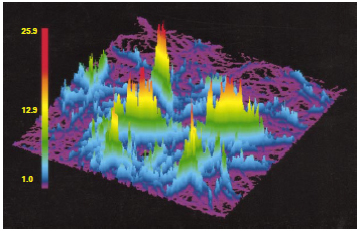 The dynamics of a fluid surface filled with high-amplitude ripples was studied with a technique (diffusing light photography) that resolves the height at all locations instantaneously.  Even when nonlinearities are strong enough to generate motion with many frequencies, the resulting turbulent state contains large coherent spatial structures.  The appearance of these structures in a thermal equilibrium state (with the same average energy) would be highly improbable.

Amazing Solitary Waves: The uniform injection of energy into water can also excite a solitary wave.  These are long lived localized disturbances.  In the movie below you will see examples of breather and kink solitons.  It is a mystery that localized solitary waves exist at amplitudes that exceed our ability to solve the equations of fluid motion.  For the movie credit Bruce Denardo, Bradley Barber, and Bill Wright.  The breather soliton was discovered by Junru Wu, Izzy Rudnick, and Robert Keolian.

As a thank-you for plumbing the depths of this web page the deepest issue in science is now broached.

And thanks to Julian Schwinger for his interest in phenomena that spontaneously concentrate energy density.  On his behalf, the Julian Schwinger Foundation for Physics Research  http://www.physics.nus.edu.sg/~jsf/ is pleased to consider your proposals for research on this topic, and more generally on the physics of multiscale systems.  Seth Putterman is President of the JSF.