Can triboelectrification be calculated from the first principles of physics such as quantum mechanics?

For thousands of years, people have marveled at the transfer of charge between two materials that are brought into contact.  Rub a comb through your hair and it will attract pieces of paper.  Is the charging of the comb due to its acquisition of extra electrons, or is its negative charge due to the loss of positively charged ions?  To this day, we do not have a compelling experiment that answers this simply formulated question!  The opportunity for discovery is only amplified by the fact that materials scientists have been unable to calculate triboelectrification of dielectrics starting from Schroedinger’s equation of quantum mechanics, which is our first principle theory of condensed matter physics.  We are learning about triboelectricity by measuring the coincident emission of electromagnetic waves, which extend from radio waves, through visible light, and even way further into x-rays!  The emission of visible light from interacting surfaces is called triboluminescence. 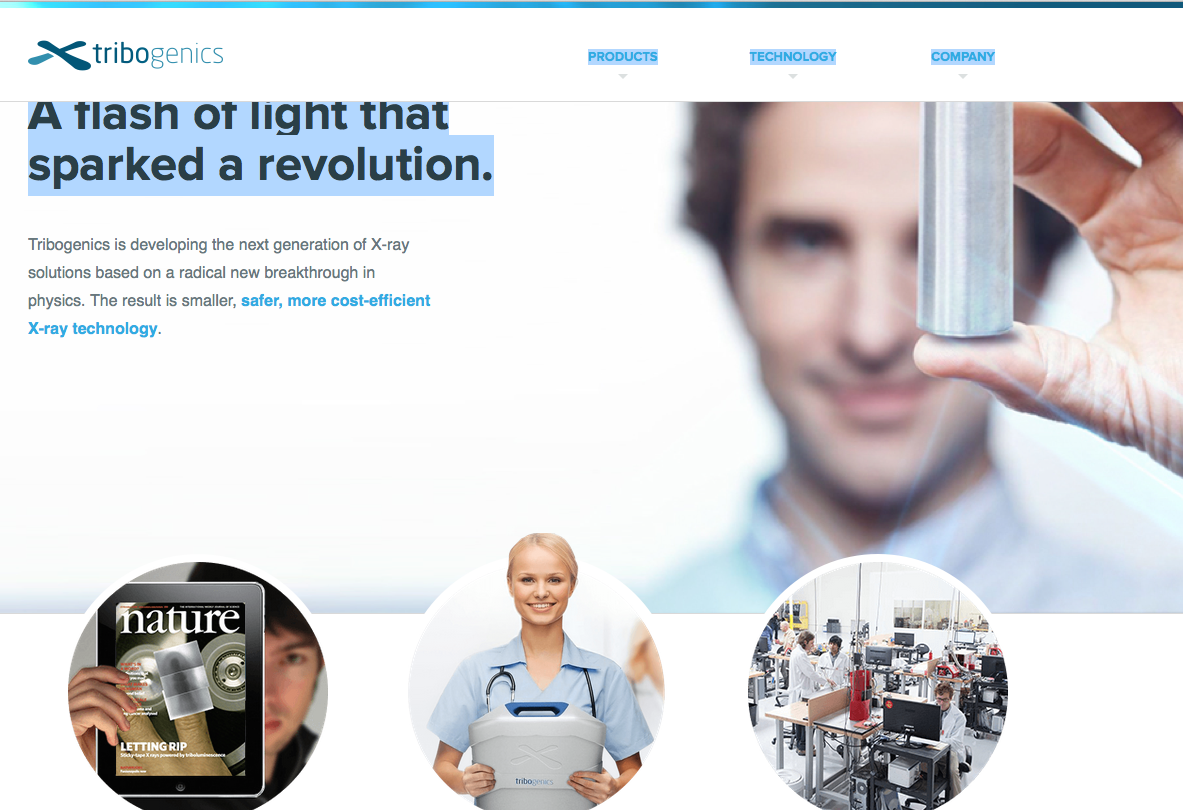 Tribogenics, which has licensed technology developed in this lab, is building compact triboelectric x-ray sources.

Seth Putterman is a member of the Science Advisory Board of Tribogenics. 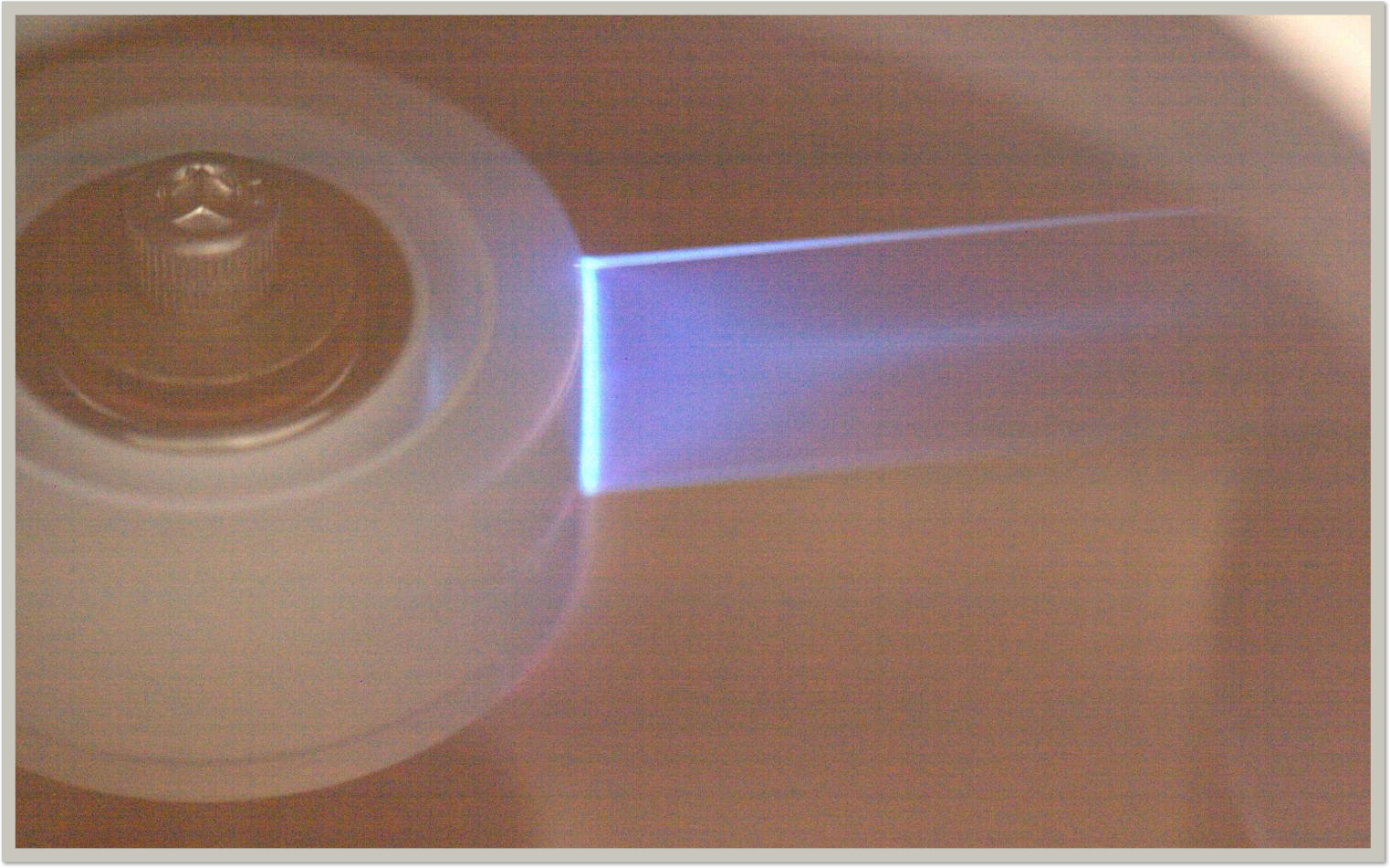 Light from peeling tape after Harvey 1935.  The charge separation leads to a potential difference of about 40,000 Volts.  Under ambient conditions, such as realized in a dark closet, the electrons bounce around and make flashes of light.  Credit to C. Camara and Juan V. Escobar. 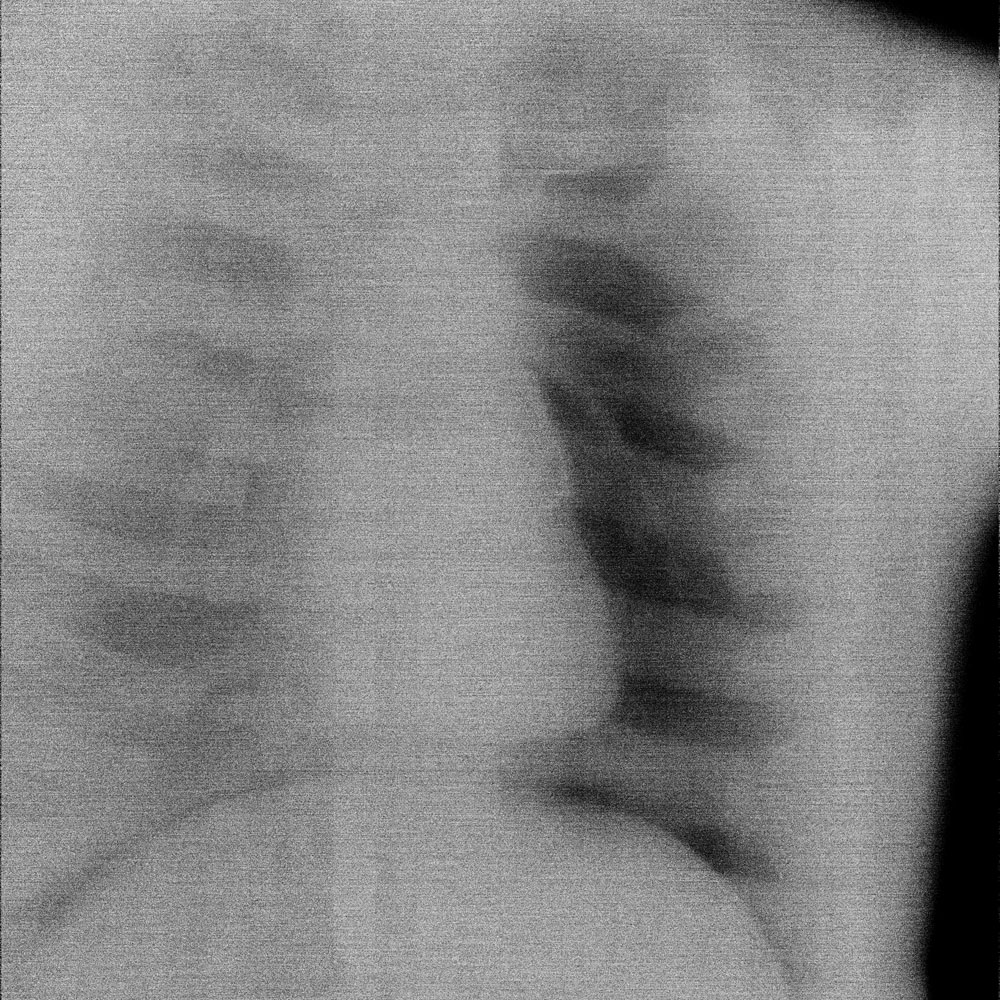 Chest x-ray taken using x-rays generated by triboelectricity.  Triboelectric x-rays with energies up to ~100 keV have been achieved, allowing images such as this to be possible.  Radiograph by A. Collins, C. Camara, and Z. Gamlieli.  Chest phantom provided by Dr. Chris Cagnon.

Photograph of barometer light discovered by Picard 1676, made red here by the addition of a little bit of neon gas.  A cylindrical glass tube containing mercury rotates about the horizontal axis at about 1 cm/s.  The light is due to picosecond electron pulses that form at the ascending meniscus of the glass, easily seen with the unaided eye.  Credit to Budakian, Weninger, and Hiller.

Movie of x-rays from peeling tape.  In a vacuum, all of the voltage built up by triboelectrification goes into energizing electrons.  So in addition to light, x-rays are emitted!  In this movie, the x-ray emission from peeling scotch tape is so strong that it pins the needle of the Geiger counter.  On the right is a radioactive source.  Credit to C. Camara and Juan V. Escobar. 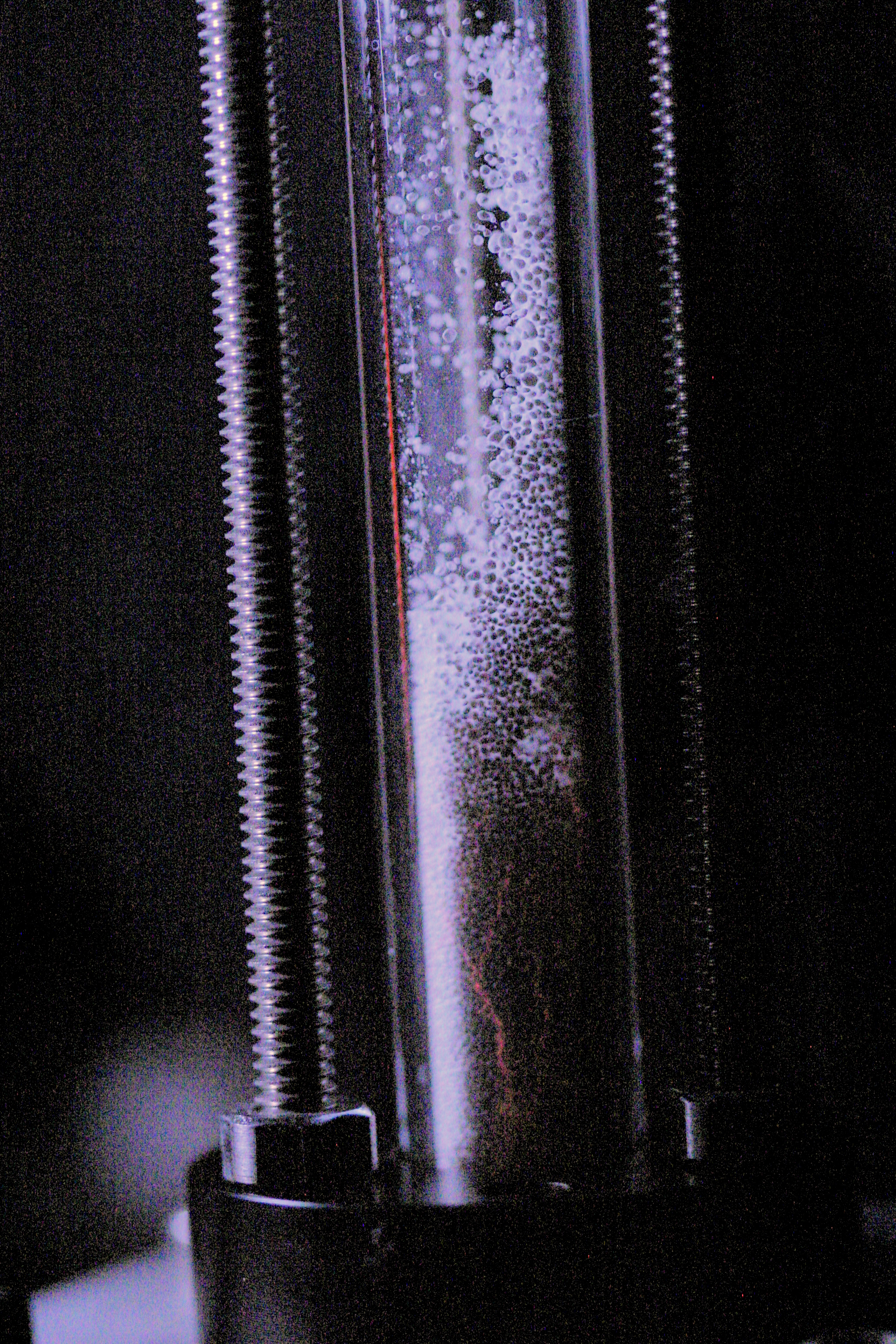 Lightning produced from the shaking of teflon balls.  Credit to A. Bataller and J. Hird. 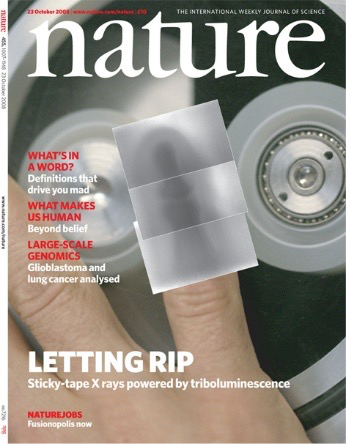 X-ray photograph of a finger that uses peeling adhesive tape as the source of x-ray photons. 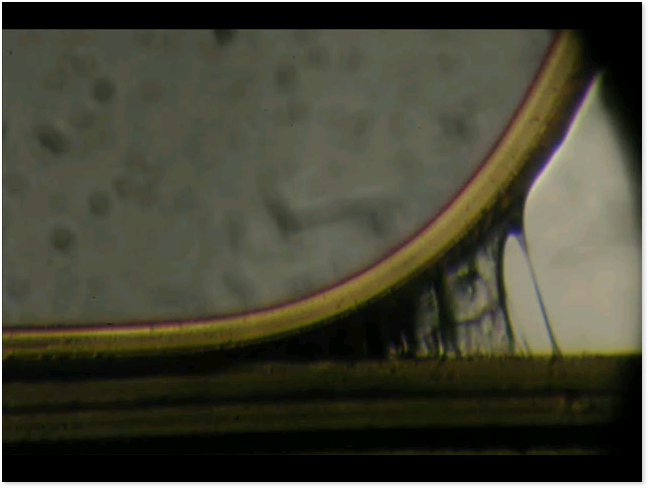 The force holding sticky tape to its roll is the weakest force in chemistry (the van der Waals force).  How does this weak force lead to organized charge separation and nanosecond x-ray bursts? 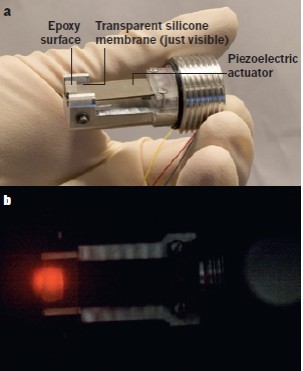 A triboelectric x-ray Machine: a) Hird and colleagues hand-held device, shown here without its vacuum encapsulation, produces x-rays (not shown) when a piezoelectric actuator repeatedly brings an epoxy surface in and out of contact with a silicone membrane.  b) The image shows the vacuum enclosed apparatus in operation in a low-pressure neon atmosphere, in which the characteristic orange-red of neon glow discharge can be clearly seen.  Credit to Kneip, Nature 2011. 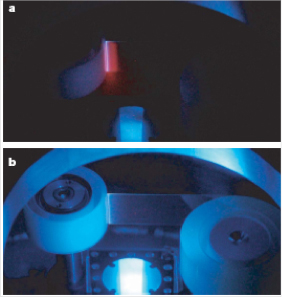 Peeling tape accelerates electrons to 40 kV so that they create blue light when they impinge on a scintillator (circular disc).  Scintillations produced by peeling scotch tape at a speed of a few cm/s is all that is needed to take this picture.  Most of the x-rays come out in pulses that are only a billionth of a second long and from a region that is only 100 microns wide!  Can you find the 100 micron x-ray source? 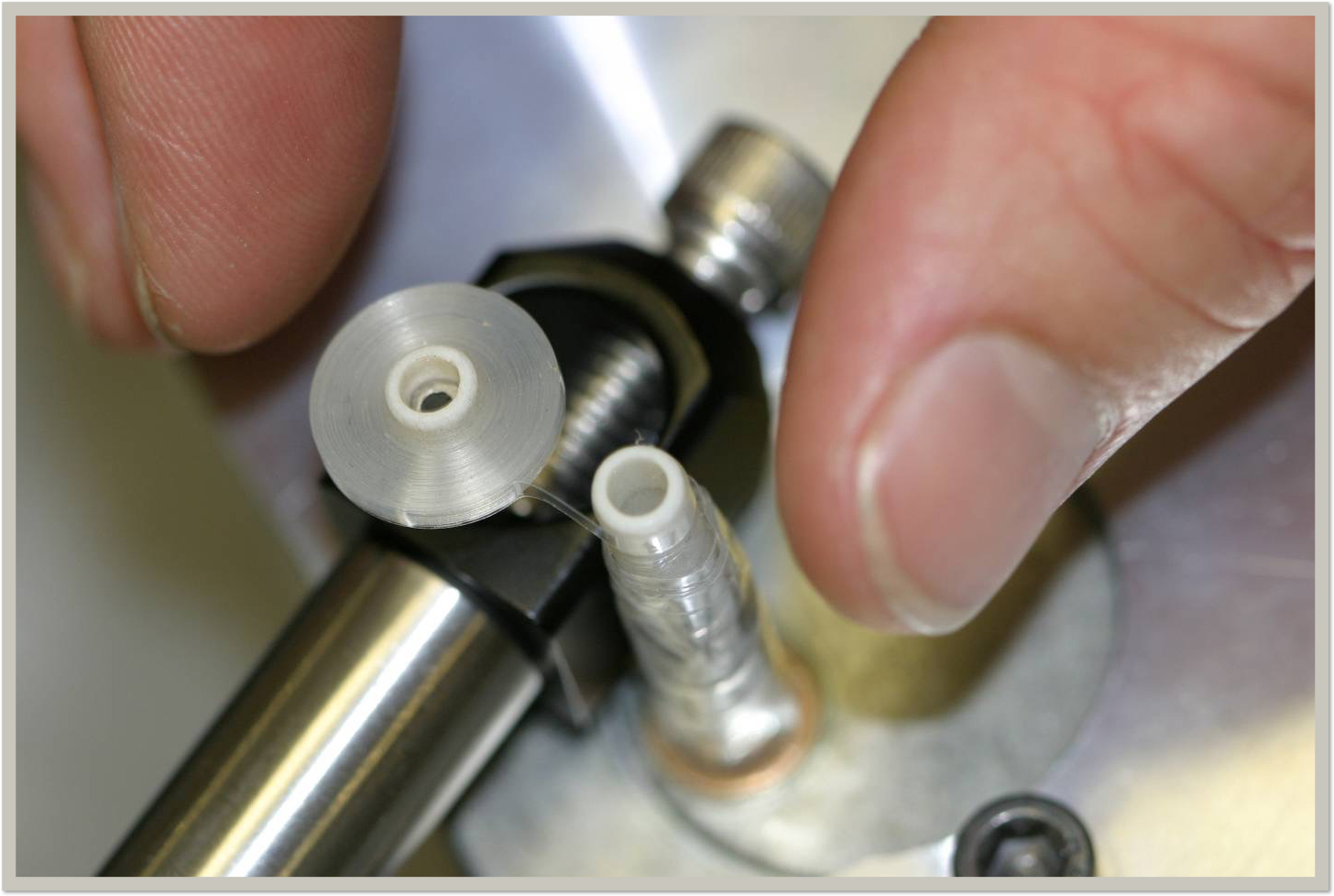 As the active region is so small, one can build a nanosecond x-ray pulser from scotch tape that is only ~ 1 mm wide!